I could swear that when it comes to the topic of marriage and single still, I have the weirdest conversations. This particular conversation occurred with a friend of a relative. He may have had ulterior motives for this statement but I could sense that he actually believed it.

For clarity sake, second wife, as used here, refers to marrying a man who is still married to another woman. 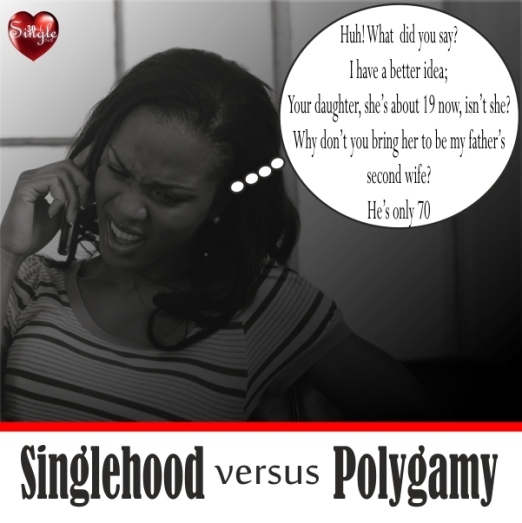 If we took a poll, it wouldn’t be too surprising to know that many people think this way too, that hypothetically, if a woman was faced with two final opinions – becoming a second wife or remaining single, she should choose the first.

But of course, polygamy is only acceptable if the man is the one with two wives, not the other way around *hisssssssssss*.

Polygamy isn’t a practice that is strange in Nigeria. In fact, the older generations not only lived it, but practically celebrated it. I was told a story (close to home actually) of a woman who married a second wife for her husband with her own money (True story)! But this isn’t 1960, times are changing and surely, culture is now more evolved?

Women are out there ruling the world and taking a more active role in society so much so that the validation, affirmation and security that would originally come from a man should have taken a major bench seat (well, sort of).

Regardless of all the ‘girls run the world’ rhetoric, the average society’s perception of a woman is still controlled by what her marital status says, hence the underlining grounds of the above conversation with my friend (who isn’t really my friend *hehehehe*).

This begs the question; why would a woman by herself (with her own two legs and eyes wide open) choose to become a second wife?  For love, money, security and status…

Love: Well, the woman’s love may be sincere, she somehow fell for this married man and realised that she would rather be his second wife than live without him (I said sincere, not smart). But if the man loved you, even half as much as you do, why doesn’t he leave the first marriage? (Now, I am not advocating for divorce, just trying to point out a flaw in the love argument). He is indebted to her…He cares about her…She is the mother of his children…He loves his first wife too… Whatever the reason is, it is a clear case of ‘eating your cake and still wanting to have it’ and should be enough for you to know the situation is already dicey. They say “the first time is the hardest”, he did it with her, chances are he will do it with you, maybe, not marry a third wife, but there will always be another latest woman unless you have some secret powerful assurances or maybe do not mind doing all the loving. Also ‘cheating’ is a word that can never be used in such relationships (not for the good reasons), it is after all, an open marriage so sharing is a yes from inception.

Money: General knowledge says that this is the primary reason behind most decisions to become a second wife. Many women would never marry a man as a second wife except he had loads of money. They most likely wouldn’t have to live in same house as the first wife. They could travel the world on the man’s money and see him, maybe once in month or less. Well, if truth be said, I really don’t have an issue with this, everyday, people everywhere make decisions for money. However, to be this person, you have got to be very aware, smart and strategic enough to have a longterm plan otherwise when the ‘beans don, you go see koboko’, translation: while you are there busy travelling the world and living like a princess on the man’s money, don’t forget that the carriage turns into a pumpkin at midnight. Very patient and vindictive wife number one and her likely grown children are waiting to exert their ninja revenge on you. Plus, you get the added bonus of drawing your children into a life of unnecessary drama with step-mothers and siblings, who probably would hate them just for existing alone. How much money is really worth this?

Security and Status: Now this draws its roots from a larger societal issue and unfortunately, our brains are still hot-wired in this line, sometimes, even sub-consciously. People, especially within the Nigerian context, still believe that there is a level of security, credibility, importance and even respect a woman can only attain when she’s married and yes, this is somewhat correct. When a single woman doing really well financially and in her career passes an age threshold, you begin to hear people find the tiniest reason to insult her on the basis of her singlehood with statement like, ‘that one will not go and marry instead of jumping from one place to another’ and sometimes, even ‘whore-shame’ her, questioning the integrity and hard work it took to get to where she has gotten. It is on this bedrock that women everywhere and everyday are choosing loveless and less than ideal marriages for the title, ‘Mrs’. Some marriage decisions are being made on the basis of what the title provides in the eye of society, family and friends, rather than what the life after the ring has been worn would mean.

To be honest, you really can’t blame them; in this society it takes a lot of strength to say no to a marriage proposal when you pass the ‘marriageable’ threshold. I have heard people (Mostly men and even women) say that a ‘bossy’ single woman’s problem is that she doesn’t have a husband or a man in her life. When you have people say it is better to be a second wife than be single, irrespective of what that life may entail, you know that the issue is tradition. But again, I like to believe that modernisation is changing things (howbeit slowly). Women are demanding and requiring more than just the gift of ‘Mrs’. More women are making their own way, dominating different careers, writing their names on the sands of time and demanding more from society and just the grace to be a ‘Mrs’.

To conclude, I would say that I am aware that not everyone has a choice in matters like this and sometimes even that choice is overruled by factors like religion etc. Women, everywhere make life decisions based on different reasons that I am not privy to, however, to say that the life of a second wife is preferable to singlehood is just incomprehensible from where I am sitting.